Lokashakti is a band based in New York City, founded to promote and fund our nonprofit organization through the creation of original protest music.  The idea is a little unorthodox, so read on – hopefully it’ll all make sense by the end. 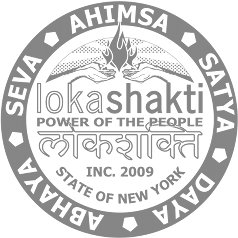 Thing one that makes us a little different is the fact that Lokashakti is part of a nonprofit organization, Lokashakti Inc.  Although most bands are pretty much nonprofits by default, especially when just starting out, few are formally set up such that any money they do happen to make goes towards a charitable cause.  In this sense, you can be sure that every show we ever play is a benefit show, and 100% of the proceeds always get donated from everything we ever sell.

Conceived as the alter ego of an organization performing a legitimate social service in its own right, those of us at the nonprofit figured that rather than perpetually be tied to a system of charity – soliciting endless grants and private donations – our time might be better spent trying to create something with the potential to both help us stay afloat, while also serving to get the word out on what we do, and we hope even contribute positively to the world of culture and political art.  This is where the music, very much inspired by our organization’s mission, comes in.

The second thing that makes Lokashakti a bit different from your average band is that from the very beginning we’ve been intent on not confining our music to any one particular genre.  The songs on our first EP, Three Stories, each combine multiple types of music, and after only a cursory listen you’ll notice they differ greatly from one another as well.  Rather than keeping the music we play relatively static from song to song, we prefer to create dynamic musical content, drawing from the rich heritage of peoples and cultures around the world.

So we take a creative approach towards using music to shed a spotlight upon whatever issues we try and tackle.  Our lyrics are always written to highlight injustice, encourage an end to war, violence, and oppression, and provide a focal point for activists to be able to rally around in their work for peace and social justice.  As musicians this is the most effective way we could think of to use our art for social change.  So while you may not see “protest music” in any common list of genres anytime soon, it really is the one thread running through all of our songs.  Hopefully you’ll dig what we’re about.